Ru
About the Project About the Competititon Blog FAQ User account Ru
Nov. 27, 2019
Kommersant. A "back yard" for five million people. Interview with Vadim Bass
From Kommersant "Territory of Comfort." Insert №209 from 14.11.2019. 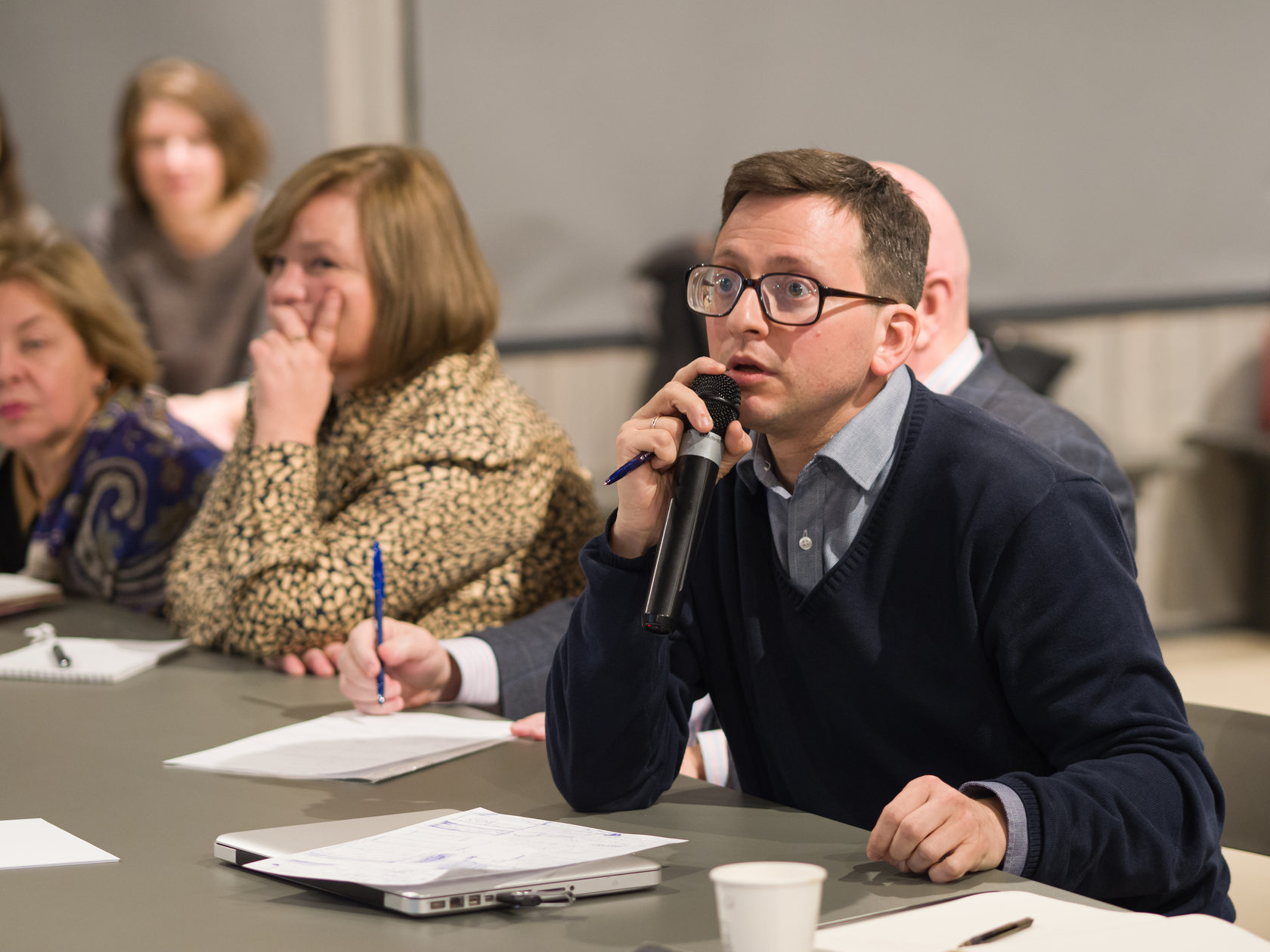 Vadim Bass, doctor of art history, lecturer at the European University at Saint Petersburg.
Vadim Bass is an architecture historian, doctor of art history, and lecturer at the European University at Saint Petersburg. If you decide to read about Tuchkov Buyan on Wikipedia, the majority of the links will be to his academic works. He studied the history of this site before the whole city pounced on the chance to come up with a name for the future art park and vote for its future functionality. We talked about how it came to be that this blind spot has existed for three whole centuries in the very centre of ceremonial Saint Petersburg.

— This is perhaps the most important question. I know that you even conducted a tour over the summer: "Tuchkov Buyan: Saint Petersburg’s blind spot." So why has this site remained so… under-utilised?

— To a certain extent, this is a relic of Petrine logic in the planning of Saint Petersburg: partially with a nod to Amsterdam, Peter freely joined ceremonial buildings with utilitarian ones. That’s why here, we might have a palace with a shipyard just across the road. Then that became a tradition, and by the beginning of the 20th century, Saint Petersburg looked like a combination of a palace city and a barn city. However, a hole remained in that fabric and worried everyone. On top of all that, there were five islands initially. They were joined with the mainland one after another by filling in the waterways between them, with the exception of Vatny Island: it belonged to the Ministry of Internal Affairs and the city couldn’t do anything with it. Beginning from the end of the 19th century, there were many versions proposed of how to put Tuchkov Buyan to use, beginning with an idea to carve out construction districts. In 1912 and 1913, two competitions to create an exhibition village with buildings for exhibits and conferences, museums, research laboratories, and so on. At the end of the day, none of these attempts amounted to anything. In addition, at the turn of the century, a large red-brick construction was erected here: the state wine warehouse and an alcohol distillation factory, which would become the State Institute of Applied Chemistry during the Soviet period… and here we have the blind spot: you look in that direction and don’t see anything that fits in qualitatively with the rest of the panoramo. A failure that we’re simply used to not noticing.

— There's some kind of bad history to this place—even competitions didn’t help.

— There's nothing bad about the utilitarian and warehouse portion of this story. The adaptation of industrial architecture for new needs is an important component of contemporary work with historical legacy. But there was a failure to accomplish something each time based on "objective" reasons. Let’s take the 1913 competition—the most interesting and strongest one, from the perspective of architectural solutions. There were plans to hold two all-Russian exhibits in Saint Petersburg, so they planned on building the exhibition village on Tuchkov Buyan. Projects from Ivan Alexandrovich Fomin, Oskar Rudolfovich Munz, and Mikhael Haimovich Dubinsky—all first class architects—took part. But the First World War ruined those plans, followed by the Revolution and so on.

— At the "Heritage" round table, there was a discussion of how this site’s past could help determine its future. Were you able to get a feel for the general direction of development?

— Honestly, I’m very cautious with regard to any discussion of a space’s memory: they give an architect an initial selection of elementary metaphors that are not usually developed as deeply as they could be. Something along the lines of: "oh, here there was a Dutch island—let's do something about the Netherlands."

— Then maybe it’s worth basing a discussion on the functionality of the place?

— I'm not a sociologist or an urbanist. It’s hard for me to imagine what mechanisms could be used to establish some kind of social consensus about this space. You know, there’s a certain position called "not in my backyard." When people say, "Oh, that’s a great idea! Please make it happen—just not in my backyard." That won’t work here. Tuchkov Buyan is a backyard for five million people—for five and a half million Saint Petersburg residents of varying age groups, with different life experiences. Just image: several million people, and each of them has their own story of their relationship with and memories of this place.

— What's your personal relationship with this site?

— For example, my dad worked at the State Institute of Applied Chemistry his whole life: he came their right after he graduated from university and later retired from there. I remember how they built a column in front of the building before the May Day demonstration, and we had to gather in front of the entrance. I can’t say that this provided for any particularly deep relationship with the place. But later on, when I was still in the Academy of Arts, my advisor threw out the idea to write about architectural competitions and about Tuchkov Buyan in particular. The history of this place and the history of competitions became a part of my dissertation and, later on, my book. So I have more of an academic relationship to Tuchkov Buyan rather than any particularly warm feelings connected with special personal memories. Coming back to the question of functionality, urban real estate specialists probably understand the situation better. They see which functions are in demand and which aren’t, making predictions in the process. But the choice of functionality for this place isn’t Tuchkov Buyan’s biggest problem. People get used to everything, whether a movie theatre, exhibit space or "creative workshops" were to be built there; whether there were to be two 500-seat theatres or one 1000-seat hall. The issue is a different one: we have a fragment of an important architectural panorama, and it could be screwed up for us, or… No, there’s nothing to improve there—let's just hope they don’t ruin it! In that sense, I’m in favor of a clean landscape, without any special additions, because the majority of visible architectural interventions over the past decades in Saint Petersburg only made the quality of the environment worse. Alas, with regard to a future "art park," I’m probably a pessimist.

— Does the success of Moscow’s Zaryadye Park not give you any reason for optimism?

— I'm afraid that our park will have it harder than Zaryadye, and not just because of the opposition between Moscow and Saint Petersburg. You know, there’s a certain Saint Petersburg myth: only architects from Petersburg know how to build in this city. But the "city building mistakes" of the past decades are the work of our own natives, not Moscow or foreign architectural "diverters." We have to admit that. And it will be harder because the authors behind the Zaryadye project accidentally hit a nerve with their target audience, I think, which provides the demand for that park among both Muscovites and tourists. Stylistically, all of those parabolic forms and arches in Zaryadye are a good allusion to Soviet modernism of the late 50s and early 60s. On the one hand, we have a strong overtone of nostalgia for our great Soviet past, and on the other, people want to experience nostalgia for the "good old days," for the Thaw, Gagarin, and everything else. Moscow designers use this extremely well: you come to the city and see all kinds of kiosks with fonts from the 60s, the pseudo-handwritten neon signs. The problem is that Petersburg doesn’t have this nostalgia at all: Moscow was the city of Soviet success, while Leningrad was the city of internal emigration. You can’t play on Soviet allusions here, but trying to dig up nostalgia for the Imperial 19th century… I'm afraid that there aren’t any tools to stylistically realise that idea. What will happen is another example of so-called Petersburg contextualism, which is already вторая, третья, седьмая вода на классическом киселе.

— Maybe it’s worth starting from what still doesn’t exist in Saint Petersburg? How do you like the idea of a park for loners?

— I like buildings more than people, but I don’t understand the idea of a park for "loners" at all. Remember in Ilf’s "Notebooks?" "Lonely man looking for a room. Lonely man needs a room. Lonely, lonely, horribly lonely. Lonely man with daughter looking for a room" We have five million lonely people like that. No, I’m afraid that ideas like that are more likely to distract us from social consciousness. If you went out on Dobrolyubova Avenue right now and asked a local, "What would you like to see over there, twenty metres away from you?" You probably wouldn’t hear them say, "A park for loners." Or, "There's nowhere I can be alone." This notion is in no way, but ultimately, all of this high-minded reflection has to be transformed into something more concrete.

— It seems like the blind spot itself is resisting attempts to see it in a new light.

— Regarding the ability to see: it suddenly turned out that in Saint Petersburg, there could potentially be a new scenic spot. Before, an average citizen didn’t have the ability to look at the Palace Embankment and at the Rostral Columns from ten metres up with this viewing angle, and that’s a very valuable opportunity. Look how well this worked at Zaryadye: you stand over the Moskva River and look at the city in a new way. But this is also such an obvious idea that any landscape designer will come to our blind spot and say, "Let's make a viewing platform here!" But overall, my only hope is that whatever gets stuffed into Tuchkov Buyan, it won’t ruin its architectural potential.