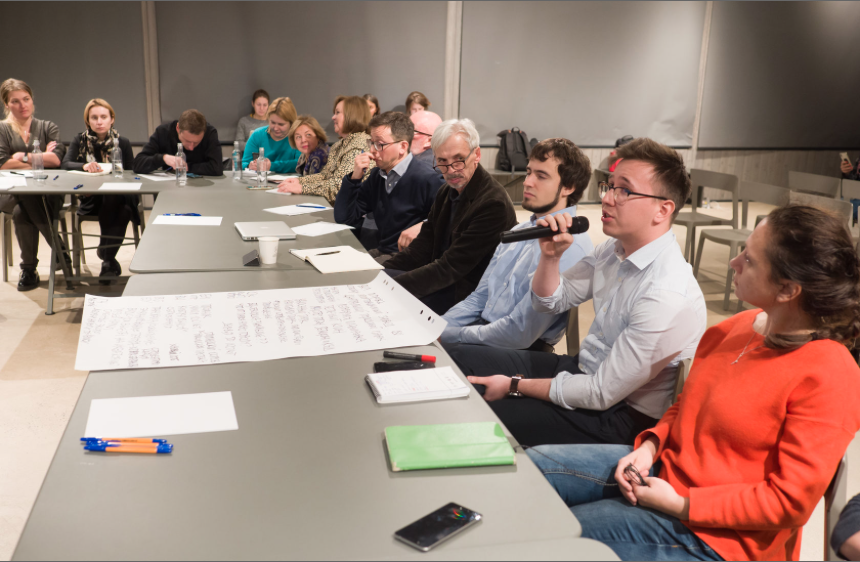 MODERATOR OF THE SESSION

Maria Tinika
Trees of Petersburg, Head of the Community

Galina Chesayeva
Russian Guild of Managers and Developers, Head of the Expert Department

PRINCIPLES TO BE CONSIDERED IN DRAFTING THE COMPETITION BRIEF

1. Trees
It is suggested to specify explicitly in the Competition Brief that the trees are the main heritage for the future of the created park (park services, functions and even planning structure have a shorter life cycle).Therefore, the dendroprogram of the created park should be as resilient as possible and should be made mainly of local species. It was noted that the challenge was complicated by the effects of the climate change, and many traditional local species would no longer survive in the changed climatic conditions. Resilience of the dendroprogram should not only be proposed, but should also be proved in the proposed solutions.

2. Panorams
It is proposed to include paragraphs on panoramas and visual perspectives in the Competition Brief:
— preservation of the visual perspective of the panorama from the Cotton Island towards Vasilyevsky Island and the Winter Palace not only from the daytime vantage point of the park, but also from the height of the former buildings (10−15m)
— the competition proposals should include projections from viewpoints and formats provided by the list of the Committee for State Control, Use and Protection of Historical and Cultural Monuments for assess of the preservation of panoramas and visual perspectives.

3. Quays
It is suggested to specify in the Competition Brief the location of the quays or such a solution that would allow to place the quays near Tuchkov Buyan or at the border of the park and Tuchkov Buyan. Active use of the water area of the Neva estuary is an essential part of the heritage, and the quays represent a fundamental attribute of the embankment sight near Tuchkov Buyan. It seems that this paragraph fits in the line with the proposals on connectivity.

4. Granite embankment
It is recommended to specify in the Competition Brief that the granite embankment in the segment from Tuchkov Bridge to the Builders' Bridge is not an object of historical and cultural heritage and does not determine the historical appearance of the Cotton Island. On the contrary, it is characterized by natural shores and direct access to water.

5. Park for everyone
It is recommended to specify in the Competition Brief that the planning structure of the park should be arranged so as to accommodate not only collective, group and mass visits, but also an opportunity for those seeking privacy. The culture of privacy is one of the fundamental components of the park heritage of Saint Petersburg.

6. Studentification
It is recommended to provide for such a functional structure of the park in the Competition Brief that would allow students to find a place and occupation. Students' culture during the last centuries has certainly been present in the life of the center of Saint Petersburg and is its integral part and heritage.

7. Engineering culture
It is necessary to specify the memory of the outstanding Russian and Soviet engineers and chemists who worked on the Cotton Island in the Competition Brief in any form, as well as to provide for the components in the functional structure that popularize and develop the engineering culture as a part of the intangible heritage of Saint Petersburg and its daily life.

8. Social culture of citizens
It is recommended to emphasize in the Competition Brief that there should be a place and accommodation for the interests of citizens in the functional and planning structure of the park. Families, including families with peculiarities and traditions of national cultures, people aged 15−19, elderly people of 70−80 years old are specifically mentioned. The social culture of the citizens of Saint Petersburg is one of the essential components of the intangible heritage of the city.

PRINCIPLES ARE RECOMMENDED TO BE CONSIDERED IN DRAFTING THE COMPETITION BRIEF

1. Pre-Peter Park
To consider the possibility of solution of the park in the forms of pre-Peter landscape, as almost completely lost heritage by now.

2. Channels, islands, swamps
To consider the possibility of restoration or solution in any forms of channels and swamps characteristic of the Cotton Island until the middle of the 20th century especially because such channels can also solve the landscape and engineering tasks (biodrainage, biotopes).

3. Regular Park
To consider the possibility of application of the regular park-planning structure as the most typical for the gardens and parks in the center of Saint Petersburg. It is proposed to consider the possibility of interpretation of the park as a monument to the Age of Enlightenment, the ideals of which had found one of the most consistent materialization in Saint Petersburg.

4. Arena Hall BC as heritage
To consider the possibility of at least partial preservation of the structures, volumes and architectural design of Arena Hall business center, as heritage of a short but vigorous epoch of the post-Soviet development of the city. (Note: The facility is not the subject of the Competition Concept. The thesis is contained in the resolution in order to reflect the views expressed at the event.)

5. Functions of stadiums
To consider the possibility of preservation and restoration of the sports facilities of the era of the Leningrad School of Modernism, but to review their functional purpose in favor of more urgent demanded functions (therms, climatic chamber, greenhouses, nursery of rare or unstable, seasonal plants). (Note: The facility is not the subject of the Competition Concept. The thesis is contained in the resolution in order to reflect the views expressed at the event.)

6. Park as a hub
Consider an optional function of the park as a hub of the route network on less known, obvious or hidden spaces (gardens, museums, museums-apartments, graffiti) of the Petrograd Side, to provide for the function of the development of such networks and thematic routes across the site.