About the Project About the Competititon Blog FAQ User account Ru
Ru
Oct. 18, 2019
In Saint Petersburg's parks, there's little going on at night and nothing to do in the winter. First research results on the northern capital's parks
From Strelka Mag
Saint Petersburg's parks are significantly more popular among local residents than among tourists, and for that matter, there's absolutely nothing to do there in the winter. These are the conclusions that Strelka KB researchers arrived at, who analysed more than 15,000 photographs taken in Saint Petersburg parks. These data form that basis of the next stage of research for Tuchkov Buyan Park. In the near future, the city will host several sessions with the expert community. At the same time, specialists from the European University at Saint Petersburg will determine how the city's residents see the future park.

In order to conduct digital research of Saint Petersburg's parks, Strelka KB's Centre for Urban Anthropology analysed 15, 284 photographs from social networks. They were all made over the course of 2018 in nine of Saint Petersburg's parks: Alexandrovsky Garden, New Holland, the Summer Garden, the Peter the Great Botanical Garden, Alexandrovsky Park, Tavrichesky Garden, the Primorsky Victory Park, the S.M. Kirov Central Park of Culture and Leisure, and the Quiet Leisure (Tikhy otdykh) Park on Kamenny Island.

In order to assess user activity in these parks, researchers created a representative selection of photographs posted on social media from an overall dataset of more than 100,000 possibilities. Afterwards, the selected was screened for advertisements, duplicates, and photographs unrelated to these locations, then labelled based on a series of criteria. 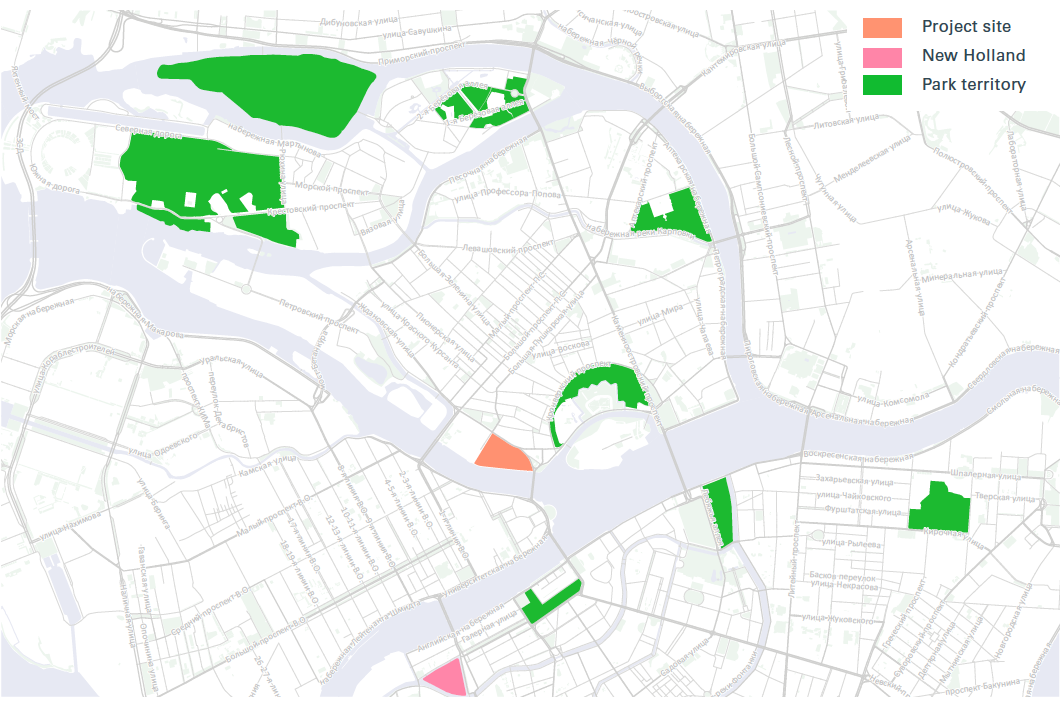 The main parks of Saint Petersburg, with Tuchkov Buyan marked in orange and New Holland marked in pink
SAINT PETERSBURG: A CITY OF DAYTIME PARKS?

It's safe to say that after dark, little goes on in Petersburg's parks. Only New Holland and Alexandrovsky Garden have any semblance of nightlife: researchers connected it with the existence of amenities that continue to work in the evenings and lighting for architectural landmarks, as well as the central location of those sites.

In the winter season, Saint Petersburg's parks are also noticeably empty. The same exceptions apply: New Holland and Alexandrovsky Garden. The first remains popular thanks to the skating rink, while the second owes its popularity to the lighting of the surrounding buildings, including the Admiralty and the St Isaac Cathedral. 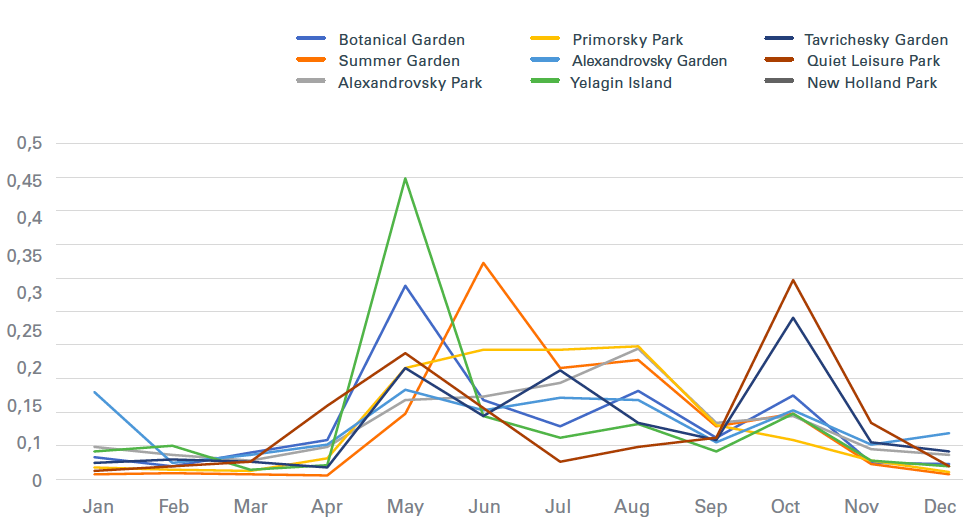 Seasonally dependent park activity
The active period in the parks begins in May and lasts until August (in some cases, even until October). Come May, a sharp increase in activity can be noted in nearly all parks. First and foremost, this is connected with the blooming of the flowers, which serves as an attraction of sorts for visitors. In October, during Indian summer, landscape parks like Tavrichesky Garden and Quiet Leisure experience increased activity.

Parks in Saint Petersburg are primarily in demand among local residents. The only park where tourists are more numerous than locals is Alexandrovsky Garden. Just 45% of its visitors are Saint Petersburg residents. Strelka KB noted that tourists prefer traditional architectural landmarks to parks.


DO PEOPLE REALLY LIKE THE WATER THAT MUCH IN SAINT PETERSBURG?

Among park visitors, an increased interest in the park can be seen: fountains and ponds take 6th and 9th place among the most photographed locations. Among those sites that attract the most attention of people in Saint Petersburg's parks are fountains, ponds, flowering plans, pergolas, and architectural monuments.
The main visitors to Saint Petersburg's parks are family's and middle-aged individuals without children. Families are predictably active where there are playgrounds for children, amusements and other sites connected with children's entertainment. The youth is most noticeable at New Holland; however, families lead in the overall number of visitors in all parks that were researched. 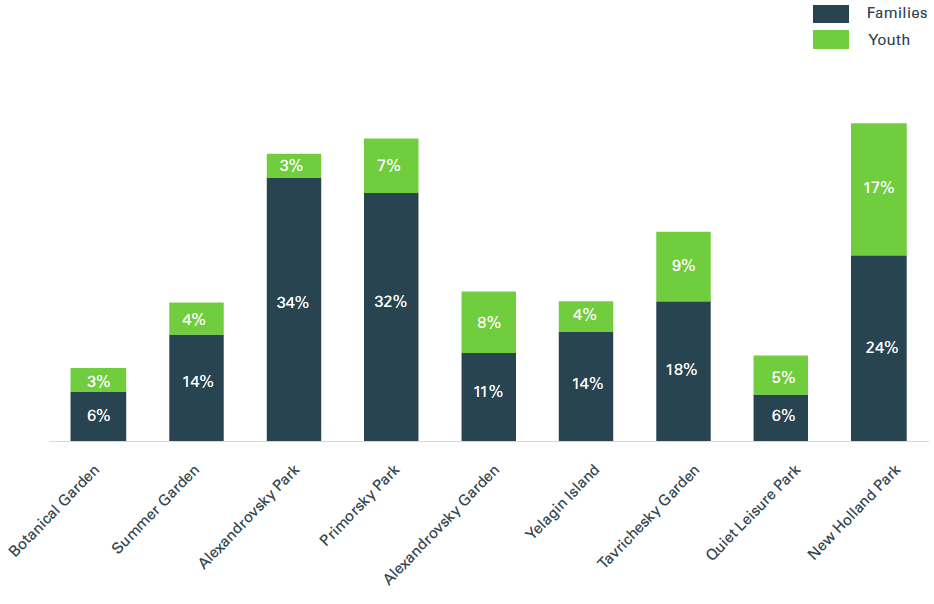 The target audience for saint petersburg's parks
The older audience is evenly distributed among the parks of Saint Petersburg, though Alexandrovsky Garden is especially popular with them: there are twice as many representatives of the higher age brackets there than in other places.

Another research block was devoted to the frequency of park visits over the course of the year. Quiet Leisure on Kamenny Island took first place in this regard: judging by social media data, it received 14 repeat visits on average. Overall, statistics showed that people return to landscape parks, parks with event programming, and parks near their residences. Second place after Quiet Leisure was the S.M. Kirov Park of Culture and Leisure, followed by Tavrichesky Garden.

Regarding what people do in Saint Petersburg's parks, we need to speak first and foremost about active leisure. In large part, this is made up of educational programming, sports evenings, amusement attractions, and boat rentals. The example of the Primorsky Park shows that people can find ways to occupy themselves, regardless of which generation they belong to. On average, the main park attractions for senior citizens in 2018 were events connected with the FIFA World Cup, from livestreams of games to photo ops with foreign fans. Amusement attractions were more popular with the youth.

However, this data makes another problem with Saint Petersburg's parks apparent: they don't offer the opportunity for passive leisure. The exceptions to this rule are Tavrichesky Garden and New Holland. In other parks, opportunities to spend a calm, relaxing day are lacking.