Ru
About the Project About the Competititon Blog FAQ User account Ru
Oct. 18, 2019
Saint Petersburg to host a series of expert sessions on the concept for a park in place of the Judicial District
From Sobaka.ru
Already this November, Strelka KB and the European University at Saint Petersburg will launch an international competition of landscape architecture concepts for Tuchkov Buyan Park, which will be located on the site of the Judicial District. As a preparatory step toward this competition, a series of sessions featuring the Saint Petersburg expert community will be held, the results of which will be used in order to formulate the technical specification for the competition. Simultaneously, specialists from the European University will clarify how city residents see the future park. 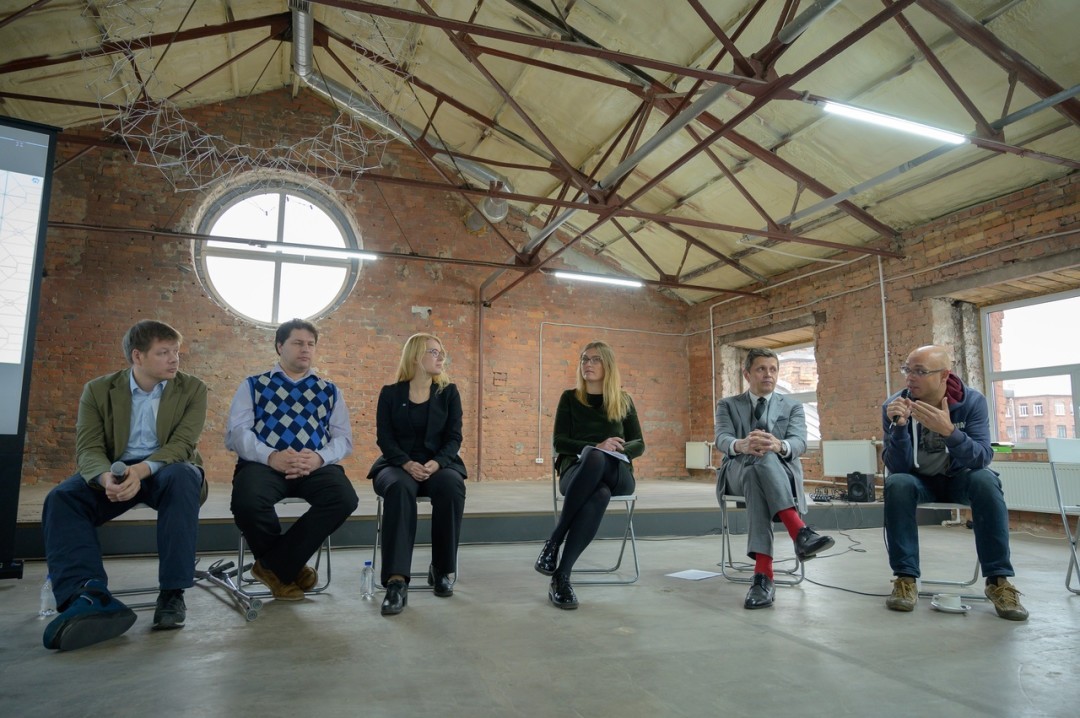 At the working session held on 17 October at the European University at Saint Petersburg together with Strelka KB, more than 40 architects and urban development experts participated. Photographs courtesy of the Strelka KB press office
In creating the technical specification, an important role will be played by the Saint Petersburg expert community. In the coming days, a series of expert sessions will be held in Saint Petersburg. From 21 to 31 October, any interested individuals can join the discussion of questions concerning Tuchkov Buyan, the future park on the site of the Judicial District. Among them are the interaction between the park and historical and cultural heritage sites, the creation of new routes through the city, and possible additions to the functionality of the park. The results of this series of sessions will be used in creating the technical specification for the competition.

CEO of Strelka KB Denis Leontyev said, "We will prepare it together with Saint Petersburg and international experts. It will cover all necessary fields—we need to figure out mobility around this territory, how residents see its future, environmental elements, greening, and functional additions to this territory."

As part of the research to be conducted by the European University, yet another important element in the creation of the park will be determined: what Saint Petersburg residents want it to be. Mikhail Lurie, docent of the anthropology department of the University, said, "We want to understand the terms in which people think about the future park: for instance, do people see it as a beautiful place above all else, or as a comfortable place? As a transient place or a place for leisurely relaxation? As a place for active leisure or as a place to quietly sit and recharge, sip a coffee, take a break and so on. We want to understand what people are afraid of and what anxieties they have, and how they imagine the image of the future park."

At the working session held on 17 October at the European University at Saint Petersburg together with Strelka KB, more than 40 architects and urban development experts participated. Photographs courtesy of the Strelka KB press office.

The opening of the competition for the architectural concept of Tuchkov Buyan will be officially announced on 15 November as part of the 8th annual Saint Petersburg International Economic Forum. The competition site will be launched soon.

The international competition for the landscape architecture concept for Tuchkov Buyan Park will be conducted in several stages. The first will take place from November 2019 through February 2020. Over that time, the technical specification will be drafted, in which the expert community, anthropological research, and the opinions of Petersburg residents themselves will all play important roles.

As part of the second stage, the architecture bureaus selected to realise their projects will start to create their concepts for the future park on the site of the Judicial District. The final concepts will be presented in May 2020, and in June, the winning concept will be announced at the Economic Forum and gifted to Saint Petersburg.

We remind you that in April, we found out that on the site of the Judicial District for the Supreme Court on the Petrograd side, a park, along with the building for the Boris Eifman Dance Palace, will be built. Experts compare it with Moscow's Zaryadye park: 6 hectares of land will be allocated for the new location. The construction of the Judicial District will be moved to the Smoly Embankment—where the museum of the Leningrad Blockade was planned. More than 80% of city residents suggested preserving the museum in its historical location on Smolny Pereulok.

Earlier, the Union of Architects launched online voting for the name of the new park on the site of the Judicial District. The winner was Tuchkov Buyan, with 27% of the votes. The top three also included the names Romanovsky and Petrogradsky. The main theme of the park was selected as well—landscape architecture.