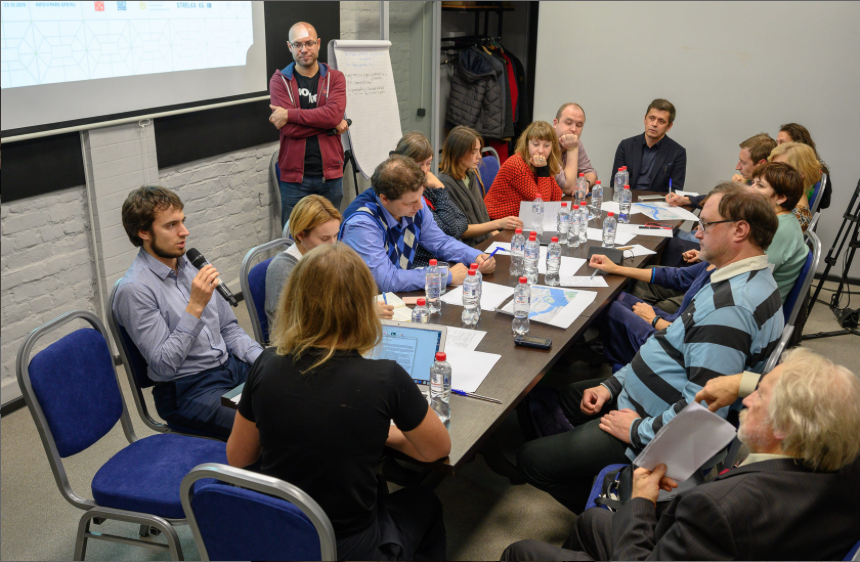 MODERATOR OF THE SESSION

Olga Gritsay
Founder of the project "Dacha in the City"

PRINCIPLES TO BE CONSIDERED IN DRAFTING THE COMPETITION BRIEF

1. To design the park "from the outside" first of all: one should not so much "load" the territory of the Park itself as to think about its connection with the surrounding territories with which it should "interact": and its very location allows the park to become a ode" connecting several embankments and walking routes.

2. To bring into effect the park's connection with water and discover the water potential of not only this place — but also of other interesting objects and spaces in the city that face the water, being not connected by it.

PRINCIPLES ARE RECOMMENDED TO BE CONSIDERED IN DRAFTING THE COMPETITION BRIEF

1. Design of the Park territory bearing in mind the connection with the surrounding territories, first of all — embankments of the Petrograd Side.

2. Variability, flexibility, gradual development; interaction with people on the territory and the launch of some functionality on the territory/along the perimeter of the Park before its opening.

3. Versatility and ability of the space to be transformed: to design the space with "open code"; to avoid detalization of its features, usage formats, and their design in the material environment — but rather, to leave only "hints" to the usage formats (and people themselves should choose how to use them, as over time the ways of using them will change inevitably).

4. Recolonization, bringing back of nature to the city, tree nursery (it is at the same time the memory of the place — this was the earlier function of the island).

5. Minimum of functions and attractors: not another park for tourists, but rather "a park for individuals", for privacy, relaxation, tranquility, contemplation.

7. To locate creative laboratories/educational functions (life-long learning format)
in the building of Hemp Warehouses, freeing the rest of the park from functionality, buildings, other facilities. (Note: The facility is located outside the battery limits of the Competition Concept development. The thesis is contained in the resolution in order to reflect the views expressed at the event.)

IDEAS THAT MAY BE USEFUL IN DRAFTING THE COMPETITION BRIEF

1. To take into account and to limit the cost of implementation of the park project to reasonable and feasible figures.

2. To take into account the cost of the Park maintenance after commissioning (this is important for the city budget (in case of transfer to the city) — because the city budget is not comparable with the federal funds, for which, presumably, the park is to be built).

3. To take into account that the Park is located in a residential area and the interests (relative quietness, protection from noise, light, etc.) of residents living nearby should be protected.

1. In a somewhat unexpected way, the experts at the session agreed in the opinion that the filling of the Park itself is secondary in relation to the function and role it could play in the scale of the entire center of Petersburg. In other words, how the Park will be t in the urban tissue, how will it be connected with the other surrounding iconic spaces for the city in general and the Petrograd Side in particular — from the point of view of a possible positive effect for the city is much more important than what will be located inside the Park itself. The question (at the session and in expert interviews) was that the Park could and ought to become a central point, which would allow to connect the following spaces into a single bike and pedestrian zone along the water: Petrovskaya embankment from the cruiser "Aurora" — to Alexander Park and Peter and Paul Fortress-Kronverkskaya embankment and Likhachev square — towards the Petrovsky island and the embankment of the Zhdanovka river with exit to Krestovsky Island. The designed Park would be the center of this "axis" capable of transforming the city.

In addition, thanks to its unique location in the context of the historic center of the city, the Park could link the elements of both classic "cultural framework" (Field of Mars, Summer Garden, Hermitage, Spit of Vasilyevsky Island, Alexander Garden) and ew cultural framework" of Petersburg, located in other districts of the central part of the city (New Holland, Sevkabel, Embankment of the Smolenka River and Smolenka Estuary, Embankment of the Karpovka River, Southern Road). In other words, the principal task and challenge for the designers is not to cram a lot of features onto an area of 10 hectares, but rather, to allow the designed territory to interconnect the other spaces that already contain such functions.

The water could become the basis for connection — and in this case, Saint Petersburg, pretending to the status of "Northern Venice", could finally materialize its water potential on the scale of the whole city, making the water one of the basic infrastructure elements in the organization of its urban space.

This approach that places the designed Park in the center of life and space of Saint Petersburg, also corresponds to the opinion expressed at the first expert session that the location and scale of the designed territory add an exceptional symbolic status to the Park project in the context of the whole city and allow to expect that this facility will become a new word in the urban planning history of Saint Petersburg.

It is not obvious that this task should become the central part of the Competition Brief for the participants of the architecture and landscape competition for the Park concept (as the proposed "axis" goes beyond the design battery limits in this competition), but certainly this idea should be mentioned in the Competition Brief. (Note: In addition, this idea and task form an important subject for communication with the Government of Saint Petersburg outside the park competition: The government could use the competition for the Park territory as an opportunity for designing the adjacent territories on the Petrograd Side.)

2. As for the ideas for filling the territory of the park itself, the vast majority of experts agreed that "Tuchkov Buyan" Park should not become an amusement park. The keynote of almost all speeches was the need in a relaxing, mostly natural park that provides some rest from stress for the residents of the metropolis — "a park that does not oblige to anything", a place where you can relieve the fatigue of a resident of a large city. The environmental component- greenery and water- was put by all experts in the first place in terms of the desired essence and idea for the Park.

2.1. Hereby the water was mentioned in two formats: both the water of the river surrounding the park territory and the possible water (artificial reservoirs) on the territory of the park itself. The importance of access to the water was repeatedly emphasized during the discussion. In particular, it was suggested that the park space could be somewhat expanded due to water, for example, the event function could " oat" to the Park — located not on the ground, but on the water, on the pontoons, ships (concerts, festivals, etc.).

2.2. As for greenery, the idea of linking the Park with the Botanical Garden on the Petrograd Side and with the Botanical Garden of St. Petersburg State University on Vasilyevsky Island was expressed. This link could be developed at the content and operational levels rather than at the spatial one. It was also suggested that the new Park could have the function of a tree nursery for St Petersburg — from where trees would be spread throughout the city; however, landscape specialists doubted the technical ability to place a nursery on this territory.

3. The educational function of the park was mentioned as the second one by importance. The educational function in this place is linked by experts (at the session and in interviews) to the ability to design future urban development in formats that meet the present and future challenges, in particular, it was debated whether the Park should provide an opportunity for young people to experiment and to present the results of their work to the general public. (Note: Experts unanimously agreed that it could be accommodated in buildings of Hemp Warehouses. Unfortunately, the facility is located outside the battery limits of the Competition Concept development. Perhaps, the underground spaces could provide an alternative.)

4. Special attention was paid by the participants of the expert session to such an aspect of the future park as adaptability, flexibility, capability of being changed. It was emphasized that the Park should not be designed in the prospect of 1−2 years, but for 10 years or more. Hereby, the speed of changes in the modern city (changes in demands, demanded formats, etc.) is extremely high, and the spaces/facilities that are not capable of being changed in the future are outdated already by the time of their construction. It would be a mistake to design such a park as "monolithic", "completed once and forever" — one should design the space capable of self- development, transformation that will be natural and not expensive. To design an "open script".

4.1. The thought that the construction and commissioning/opening of the Park should be staged grew out of this idea: the park should be designed in such a way that its various elements and zones could be opened gradually, one by one. First, it will be in line with the idea of designing and creating of a "living" Park capable of development and subject to changes. Second, it will allow not to erase the territory of the Cotton Island and Tuchkov Buyan from the life of the city for the entire period of the Park construction, but to open it for residents and the city activities in a piecemeal fashion. Third, the experience of the Moscow Park "Zaryadye", which was opened at once and failed to cope with a single mass in flux of visitors, that inflicted serious damage
to the park, also counts in favor of such a proposal on gradual commissioning of the Park. In order to avoid this, people should "get used" to the Park gradually, so that its opening would not be a one-time event that gathers tens if not hundreds of thousands of visitors who could harm the landscape facility, but a series of events that would "stretch" the audience in time. The positive experience of such an approach is demonstrated by "New Holland" island that has been opening its territory to the public gradually for several years.

5. From other ideas worthy of mentioning in the Competition Brief in one form or another:
— the need to establish the limits of the cost of implementation of the Concept and the project in the terms and conditions of the competition;
— it is required to oblige the participants of the competition to take into account (and to show this in proposals) the cost of the park maintenance, as this will fall on the municipal budget;
— to take into account the climatic conditions of St. Petersburg, including scenarios of the Park operation in winter time;
— attach to the Competition Brief the results of in-depth and complex research, including sociological one, allowing the competition participants to understand the demand coming from the city residents in respect of the Park territory and its maintenance;
— the need to observe the interests of the neighboring residents of the Petrograd Side — to protect them from noise, light affecting the windows of residential buildings, etc.